Grief, The Gift That Keeps On Giving 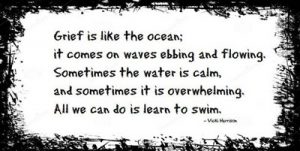 Matt,  today, January 3rd, marks the third year since you left me behind.   Three years have passed since I’ve heard your voice or seen your handsome face.   Three years.   It just doesn’t seem real.   How did I survive three years of carrying the unbearable weight of my grief.   I sit alone and remember the moment I learned you were gone.   Three years ago, January 3rd was a Saturday.  It was snowing here and all I could think about was how lucky you were to be spending your day at the beach.  I was working in the NICU feeling jealous of your new life in sunny Florida.   Jealous that I was freezing and you were laying in the warm sun.  Little did I know you were already lying in a morgue your body lifeless, cold and blue.

For three years I’ve lived in a fog.   Disbelief allowed me to survive.   Days I pretended you really were lying on that beach being warmed by the Florida sun.  Then there were days when reality snuck in and I had to crawl through choking quicksand.  Days the weight of my grief literally had me fighting for my own life.

As a nurse, I read about how debilitating complicated grief could be.   I learned how destructive this type of grief could be to the body and soul.   Never quite understanding it’s incredible power until I was thrown into the fire after your untimely death.   You see Matt, my grief has been complicated by my guilt.   For three years I have blamed myself for your death.   I became my own personal punching bag.  Constantly allowing that rollercoaster of emotions to chip away at my very soul.

I blamed myself for not being the “best” mother.  For working while you were young.  Not having the luxury of being one of those incredible moms who had time to make meals from scratch.   You know those moms who never had to be responsible for anything else except their kids.   My beatings continued as I rehashed everything I should have done to save you from your addiction.   My guilt would never allow me to see everything that I did do.   Guilt is ugly.   Guilt only let me see all of the wrongs and none of the rights.

I remember watching you withdrawal from your opioids.   I watched your body shake, sweat and fall apart.  I watched in horror.  Never quite understanding how your body could withstand the assault.   Now it’s my body that’s being assaulted.   I’m the one withdrawing from you.   I was addicted to your addiction.   For seven years, I fought to save you.   Never once thinking that I had no control of our fate.   I was so foolish thinking I was in control of anything, especially your addiction.   Call it nurses mentality.   Nurses save and your mom was a nurse.   I spent my life saving people and  could not accept that this wonder woman of a nurse could not save her own son.

So now it’s me thats been shaking, sweating and falling apart.   For most of the past three years my soul has lived in a constant state of high anxiety.   Your death caused a permanent withdrawal that I now have to navigate my way through.  Panic attacks,  ER trips thinking I’m having a heart attack, and my new friend migraines.   Every crazy symptom all anxiety and guilt related.

I remember being told that one day I would get angry.   Angry at you for causing such profound grief.  For causing my world to spin off its axis.  For causing me to drown in this dark, ugly abyss.   This overwhelming ocean of heartbreak.  Constantly fighting the powerful undertow that drags me down on the bad days.

I never did get angry.   I forgave you the moment you left.   The person I need to forgive is me.   Three years is a long time to fight the most powerful of emotions.   Three years of blaming myself for something I could not control.   Three years of near drownings when the guilt pulled me far away from my safe shore.

I will grieve and miss you forever.   This isn’t how our story was supposed to end.   I now realize that when the guilt starts dragging me under I must reach for a life preserver.   I must focus on getting back to shore.   I must learn to swim again…………