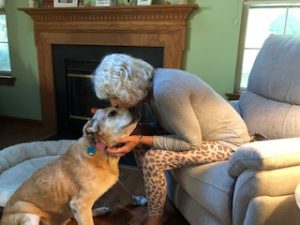 I feel like I did during those days we battled your addiction.   One day when things were going as planned I felt like I could fly.   I was always so hopeful everytime you agreed to treatment.  Like life would return to normal and you would finally return to the life your addiction stole from you.

Well we all know how that worked out.  Your addiction was stronger than my love.  It was so conniving and clever it convinced you that you were in control.   You left this world on January 3, 2015.   You were gone forever and my world was changed in the blink of an eye.   For years I walked around in a fog.   Disbelief and denial became my constant companions.  Just when I was starting to feel like I had a handle on my grief after living the uncharted life of a grieving mother 4 years and 8 months after your death, life once again became a rollercoaster ride.

I was diagnosed with cancer.   Once again that rollercoaster plummeted to the earth.  Once again my world was thrust into the unknown.  Shock, disbelief and panic found me again.   Those feelings returned with a vengeance.  I walked around numb like I did during your active addiction.   All those feelings I had buried came rushing to the surface.

My cancer made your absence even more traumatic.   I wondered if you knew what was happening here on earth.  I prayed for so long that you would come to me just for a moment to  let me know you were ok.  Finally finding your peace that eluded you here on earth.. imagine my joy when I received a message from a friend that you came to her and asked her to get a message to me.

You told her you were Matt.  You asked her to let me know you still wore your ball cap backwards.  You told her it was not my time and I must fight.  You told her things only you could know..   Your message meant the world to me.  Knowing you were still here was the best gift I could have received.  Once again I felt like I could fly.   The roller coaster was going up, up, up.  Little did I know that once again it would crash to the ground.

If I hadn’t seen it with my own eyes, I would never have believed Belle would have attacked Molly for no reason.   I immediately called our vet.  Belle had stated to show signs of aggression that was so not her.  Belle was the sweetest dog I’d ever rescued.  I thought she was reacting to my stress until the aggression continued to get worse.  It got to the point we had to slightly sedate her to make sure the aggression would stop.

I remember the day I felt her head and thought I was going to vomit.   We were sitting on the deck and she was rubbing her head against the furniture.  I called her over and started to rub her head hoping to find the spot that was bothering her.   What I felt was the size of a golf ball solid rock mass..  I immediately panicked.  Snapped a picture and sent to Stephanie our vet.

The news broke my heart.  Belle had a quick growing brain tumor.   Her aggression, like your addiction would take her life.  For one week Bella was spoiled.  Steak, hamburger, pizza anything she wanted she got.   The thing that was hardest for me was that emotionally and physically I could not go to vet with her.

Your brother was so full of compassion.  He told me Mom it’s not physically possible for you to be there.  I will be there for you.  You know Mike loved Bella as much as I did.  Mike like you took to her as soon as I brought her home.  We spent many days together with our dogs playing in the surf.

Stephanie was not just our vet.  She was my friend for years.   She loved Belle as much as we did..  I could not have asked for two better people to say goodbye to my dearest friend.  We put if off as long as possible.  I had to fight my selfish need to keep her here with me.  I spoke to so many of my dog mom friends who all relieved my guilt for doing the right thing for my beloved companion of 14 years.

Bella was the one who paced with me at night after your death.  Sleep was not something that came easy.  She was constantly by my side.  Bella was the one who found me in your closet surrounded by your clothing sobbing like a wounded animal.  I remember her walking into the closet, lifting her nose and taking in your scent.  I could  see in her eyes she knew it was you.  She kept nudging me with her nose, forcing her body into my lap.  She lay there with me for hours, once again licking my tears off my face and comforting me with her presence..

Bella left me the day after my birthday.  She could hold on no longer.  I could not watch her suffer any longer.  I prayed that you would be there with Kahlua when she crossed the rainbow bridge.  Mike said her last act of love was to kiss his face as if saying thank you.

Another tremendous loss.  Losing you, now losing another connection to you.   The roller coaster continues to keep my life on unstable ground.  Never knowing if I will be soaring toward the sky or crashing to the ground.  I do know I have no control over the ride.   I just have to hold on, pray and let Jesus lead the way……